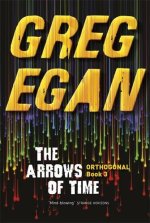 I was excited to find out that The Arrows of Time, the third and final book in Greg Egan‘s Orthogonal series, will be released in a few weeks.  I’ve long been a fan of Egan’s radically brain-bending and quietly caustic SF, and Orthogonal for the first time directed his brilliance more squarely at issues of sexual politics and a liberatory struggle for reproductive autonomy (see my review of the first two books for UK feminist magazine The F Word).  He also turns out prodigiously original material with marvellous speed – it’s only been a year since the trilogy’s second entry – which makes me wonder if it isn’t only his characters who inhabit a universe where time has different properties.

I’m also hoping to check out new books at the Singapore Writers Festival tomorrow, including at the launch of some new titles from my publishers Epigram.  (“My publishers”!  I’m always going to get a kick out of typing that, aren’t I?)